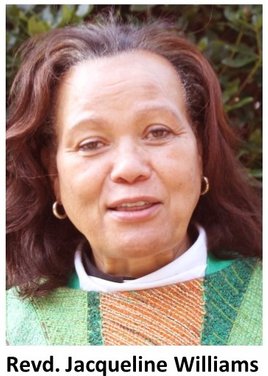 Jacque is from South Africa. She has been involved in the church since she was very young, first in the choir and later as a youth and parish worker in the Diocese of Port Elizabeth. She attended the Anglican Seminary in Grahamstown long before the Anglican Church accepted the ordination of women. She subsequently worked in Johannesburg as a researcher for the Institute for Contextual Theology and as Youth Director for the South African Council of Churches.

When she returned to a democratic South Africa in the late 1990-ies, Jacque headed the Church Community Leadership Trust (CCLT), which focused on ethics and Integrity development. In the diocese of Johannesburg, she first served at Christ the King Sophiatown as a lay minister, then as a deacon at St Timothy's The Reeds (diocese of Pretoria) and St John the Divine in Belgravia. She was ordained
to the priesthood while serving at St Margaret's in Bedfordview and took up fulltime ministry in 2013, first at St Peter's in Auckland Park and lastly at St Mónica’s in Midrand.

Jacque recently came back to The Netherlands with her Dutch husband Rob
Calmer. Jacque has a deep passion for justice, especially concerning women. People who know her describe her as an initiator, consistent, hard-working, honest, a do-er with a natural curiosity for people.

In her sparse free time in South Africa, Jacque enjoyed wildlife photography and making jams and preserves from her garden in Observatory. This talent may benefit the fruit stall at the annual Castle Fair. She is delighted to be part of the diocese of Europe and excited to serve at St Mary's with such a vibrant, diverse and inclusive community.